People who use smartphones don’t usually think about fonts. However, if you’re serious about customizing and personalizing your Android phone, fonts can be extremely useful. You can completely transform the look and feel of your Android system by changing the font.

While installing a new font on a computer is as simple as clicking a button or copying and pasting the new font files into the fonts folder, the process is slightly different on an Android phone.

Smartphone company such as Samsung, LG, Oppo, OnePlus, Vivo, and Xiaomi allow users to change the system font. While other smartphone manufacturers offer a variety of fonts, but OnePlus only offers two options like: Roboto and OnePlus Slate.

How to Change the font style

We’ve listed the steps to change the font on some popular smartphone brands’ phones below, but if you own a phone from another brand, look for an option under ‘display’ or ‘themes’.

Change the font on Samsung 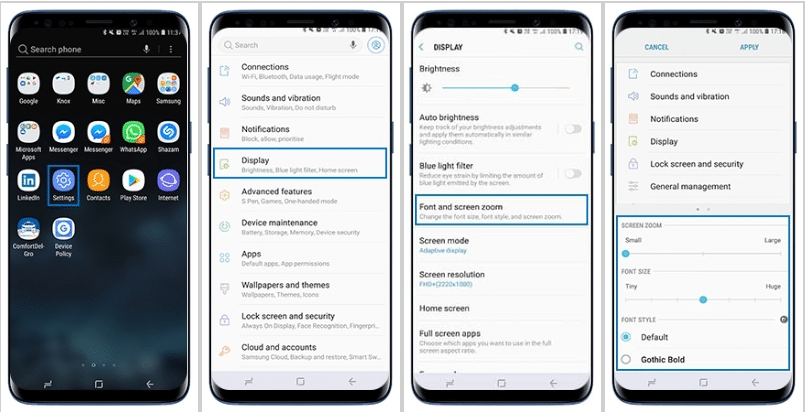 You can also download more fonts from Samsung Galaxy Store.

Xiaomi users can download and install new fonts via the Themes app, but the fonts are only available in a few countries, including India and Hong Kong. If you do not live in these areas, you can change your phone’s region to India and then download a new font. Changing your region also means you’ll start receiving software updates to your new location.

Change the font on Oppo Devices

Change the font on Vivo Devices

Changing the font on OnePlus phones

Changing the font on LG phones

Changing the font with a launcher In the Action Launcher Settings menu, tap the “Appearance” option. Scroll down  and then tap “Font.” Choose one of the custom Action Launcher fonts available within the “Font” menu. Tap on one of the options to confirm your choice and then select the back button to return to your app drawer. The font used in the app drawer and on your home screen will change to match your font selection.