Braille originated as a method of silent and tactile communication developed for Napoleon’s military. This technique was dubbed “night writing” because it enabled communication in low-light conditions.

A little more than a decade after Napoleone’s defeat, a blind 15-year-old named Louis Braille set about improving night writing to make it more practical for blind people and simple to learn. He quickly published his system, which he later enhanced with musical notation.

Louis Braille, a French inventor, invented the modern Braille script. Louis was born on 04 January 1809 in Coupvray, France. His father worked as a leather craftsman. At the age of three, Louis was playing in his father’s workshop when he accidentally poked one of his eyes with a stitching awl. His injured eye became infected later. Due to a shortage of antibiotics, the infection quickly spread to his other eye. By the age of five, Louis Braille had gradually lost sight in both of his eyes. Furthermore, you can make fancy font by fancy font generator.

Louis Braille attended the Paris Royal Institute for the Blind Youth. There he met Charles Barbier, inventor of the script for night writing (also a tactile script). Braille began developing a tactile script as an alternative to night writing. It took him two years, but in 1824, at the age of 15, he finally created the Braille script with a six-dot system. His headmaster dictated a script for him to practice with. Louis dictated the entire article into his newly developed script and then read it back word for word. You can convert new english to old english with Old English Translator.

This translation tool allows you to print out Braille for signs, notes, and other items.

There are several different sizes and styles available.

You can print the image or save it as a “.png” image of the Braille dots (right click, “save image as…”) for emailing or printing later.

After printing, you can add drops of paint or glue to each black dot, or punch small holes (from the back) to make the pattern more tactile. Also Try: Runic Translator

These are the dot patterns for the 26 letters of the alphabet: 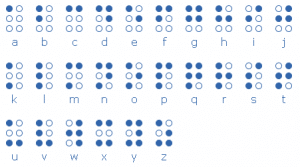 In English, the most basic form of Braille is called “Grade 1 Braille,” and it is simply a letter-by-letter transcription of the English alphabet. The chart below illustrates the Braille symbol for each letter of the alphabet:

As a reminder, this Braille converter assists you in translating individual letters to Braille and excludes Grade-2 contractions and abbreviations.

You may be wondering how we generate the Braille alphabet and then copy and paste it anywhere on the internet (e.g. Twitter, Facebook, YouTube, instagram, etc.). We are able to do so entirely because of Unicode. Wingdings Translator

Unicode is a standard for the computing industry that aims to standardize the representation and encoding of text symbols. Unicode is now supported by all major browsers and has been for some time. As long as you’re using a modern browser, you can copy and paste the Braille Unicode symbols into any document.

Note: Please keep in mind that a 100% accurate braille translation can only be performed by a human, as it requires knowledge of the text’s content. Certain Grade 2 Contracts require a level of text comprehension that a machine cannot provide. For instance, in grade 2, the combination wh can be replaced by a single character, but not when the word is made up of two words. As a result, a(wh)ile is acceptable, but ra(wh)ide is not.

How to encrypt using Braille cipher?

Braille translation makes use of a special alphabet designed for visually impaired/blind individuals, consisting of dots that can be touched with one or more fingers. Each letter is composed of six dots (embossed or not).

How to decrypt Braille cipher?

Decryption in Braille requires only the substitution of a Braille alphabet symbol (6 dots).

How to recognize Braille ciphertext?

The ciphered message is composed of dots organized in two columns of three dots each. However, caution should be exercised as it may be presented in forms that are unsuitable for tactile reading.

What are the variants of the Braille cipher?

Certain uncommon characters, such as those with accents, can be transformed into other characters depending on the language.

Braille can be displayed in Unicode characters, numeric code (consisting of groups of numbers from 1 to 6), or binary format (each digit from 1 to 6 can be rated by a bit 0 or 1).

How to print Braille?

An embosser can be used to print Braille. More recently, 3D printing has enabled you to create your own braille prints, although the process is much longer.

A Braille dot must have a diameter of 1.44 mm and a height of 0.48 mm, according to the Braille Authority.